The Qing dynasty came to power in China in 1644, and lasted until the Revolution of 1911 overthrew the imperial dynasty. During this time, China was ruled by the Manchu people, a nomadic ethnic minority that came from the north. Much of what we understand today as Chinese material culture developed during this period, including clothing, which also drew on previous Ming dynasty’s (Han Chinese) features and symbolism.

Chinese tea, silk and porcelain were incredibly desirable in Europe from at least the dawn of the Qing dynasty in the 17th century. Chinese design has inspired European fashion for centuries, in an obsession which the design historian Dr Sarah Cheang calls sinophilia. Many of the pieces in the Gawthorpe collection speak to the vast histories of interconnection between these two areas. 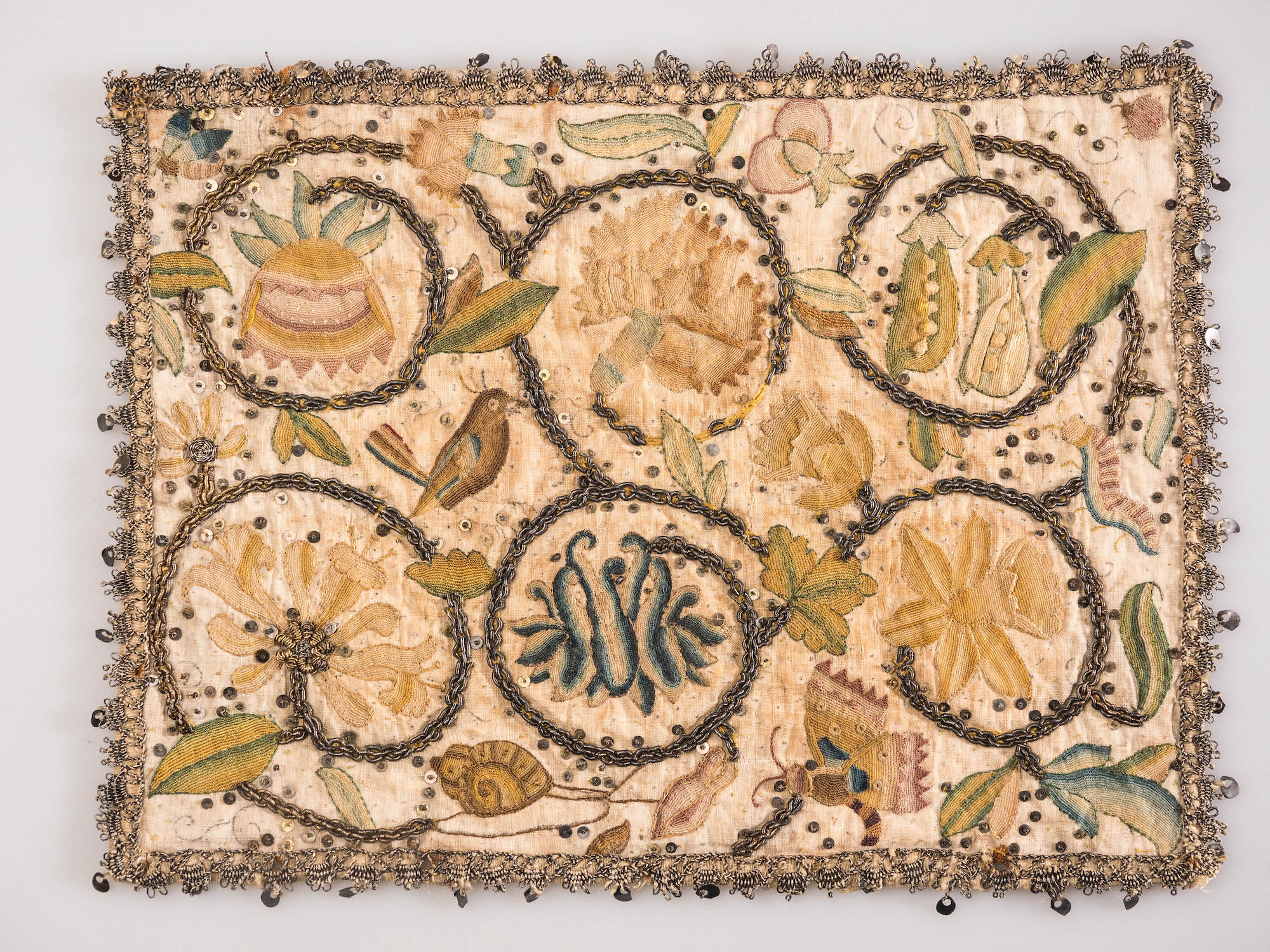 Elizabethan herb pillow, embroidered in silk thread onto linen with metal lace (passementerie) edging. It depicts a cheerful array of flora and fauna from peas in pods to insects and a snail, conjuring a country garden out of cloth, including flowers found in Britain such as carnations, daffodils and honeysuckle. Herbs and spices from overseas, as well as luxury products like silk, were drivers of European expansion across Asia. In 1600, the East India Company was certified by a Royal Charter from Elizabeth I. c.1600 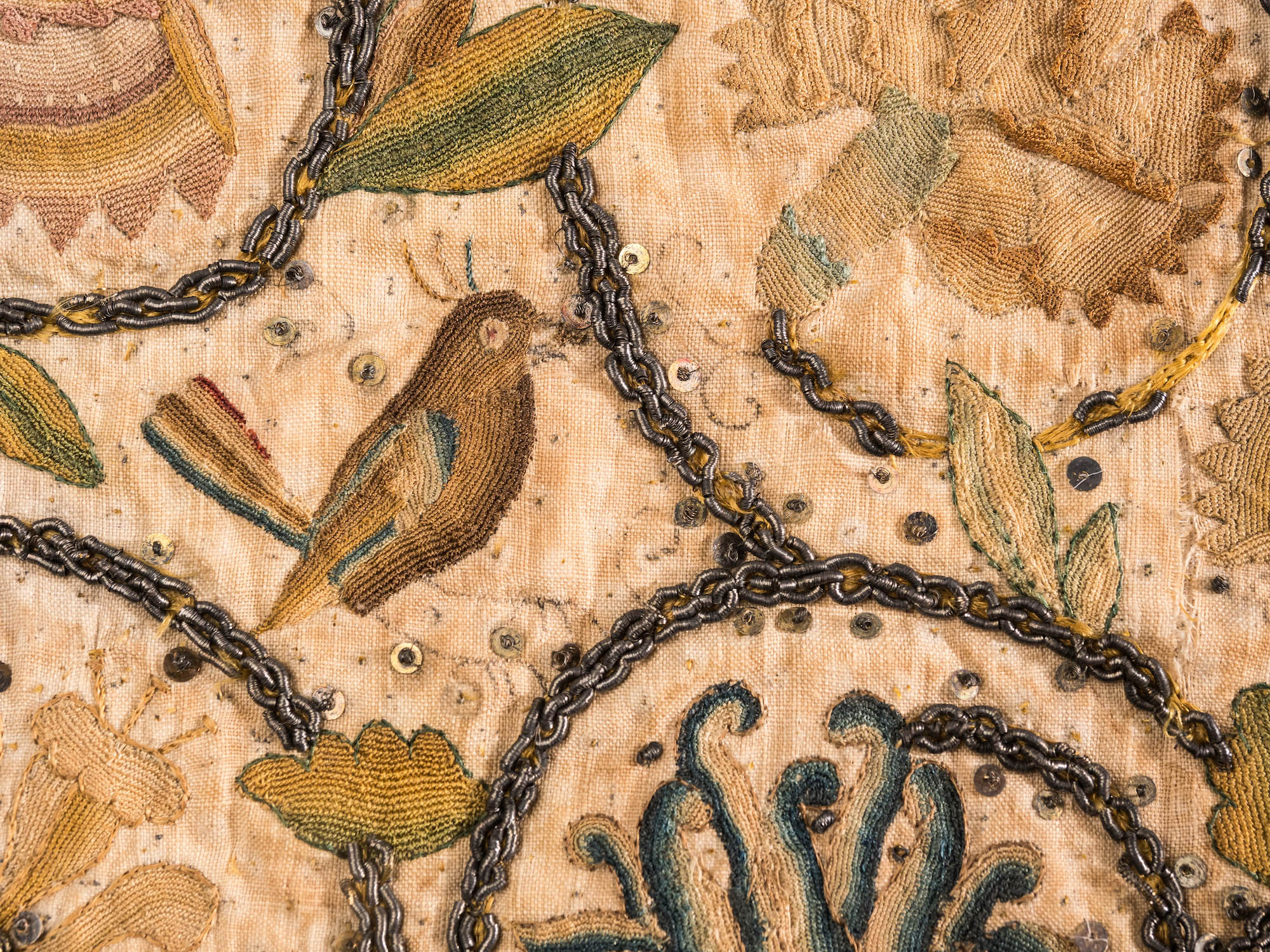 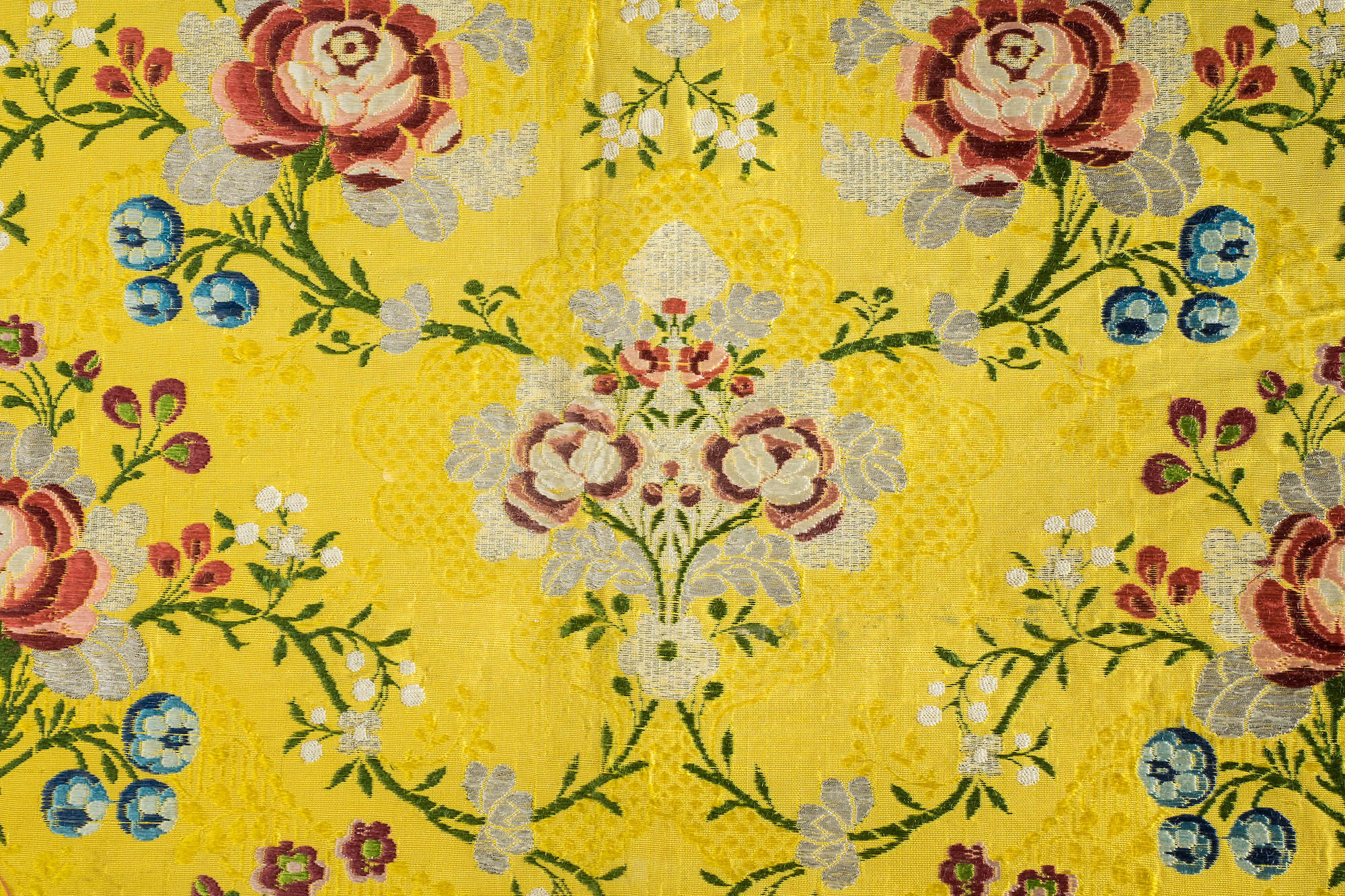 This yellow brocade silk could have been used as a dress fabric and features roses and other floral motifs. Brocade silk has the pattern woven into the cloth, rather than embroidered on the surface. Throughout the 18th century, Chinese design became very fashionable in Europe, leading to ‘Chinoiserie’, European imitations of Chinese decorative arts. It was also throughout the 18th century that silk weaving developed into a sizable industry in Britain, due to the influx of Huguenot refugees from France who fled religious persecution from 1685 onwards. Many brought silk weaving skills with them. 18th century 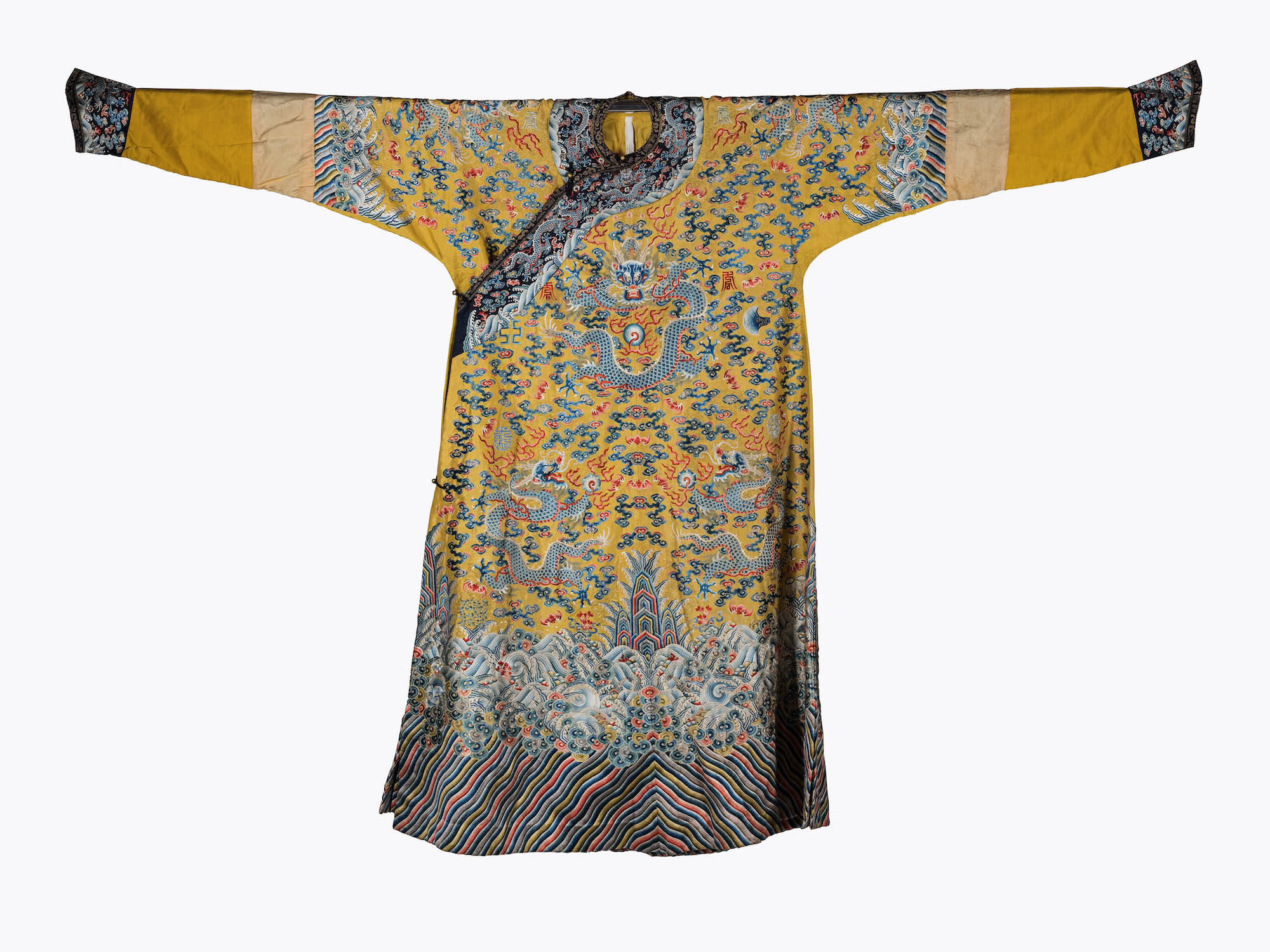 A Chinese Imperial Qing dynasty ‘dragon’ robe of yellow leno weave silk. Dress of the Qing Imperial court was highly codified and yellow was an important colour used only by the royal household, with various hues from bright yellow to golden and apricot indicating different ranks and relationships to the emperor. Certain five clawed dragon motifs were reserved for the emperor alone. c1820 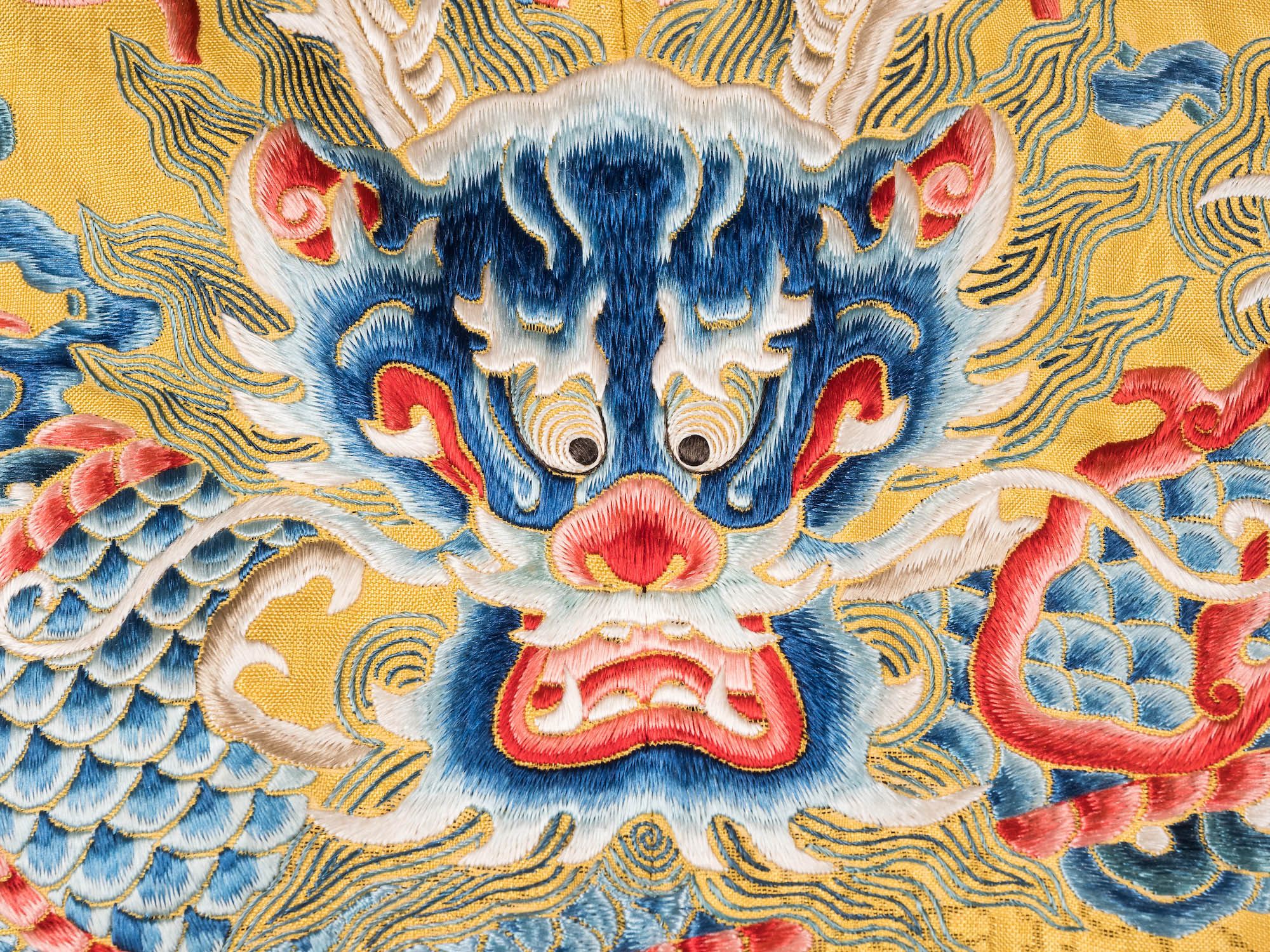 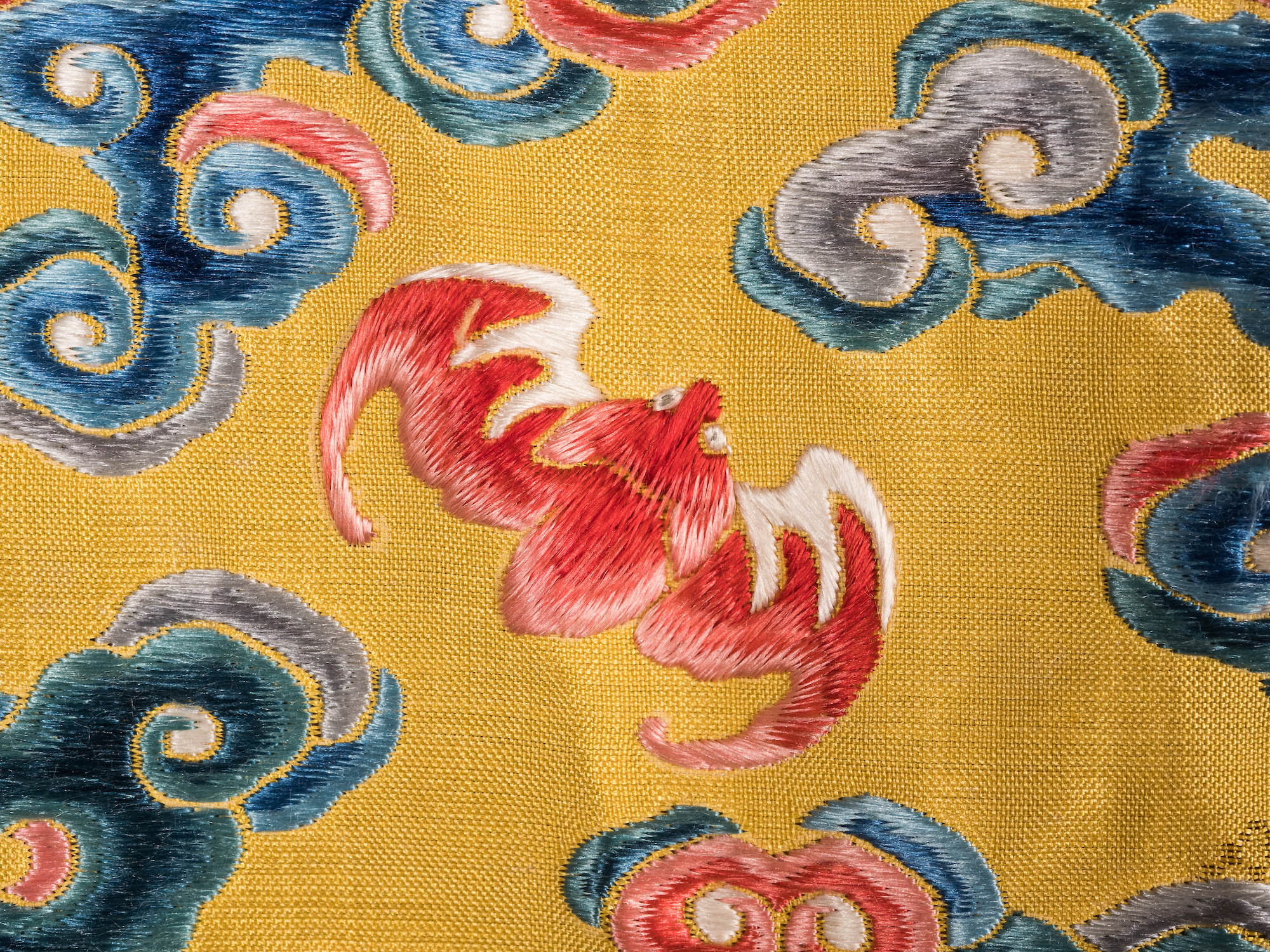 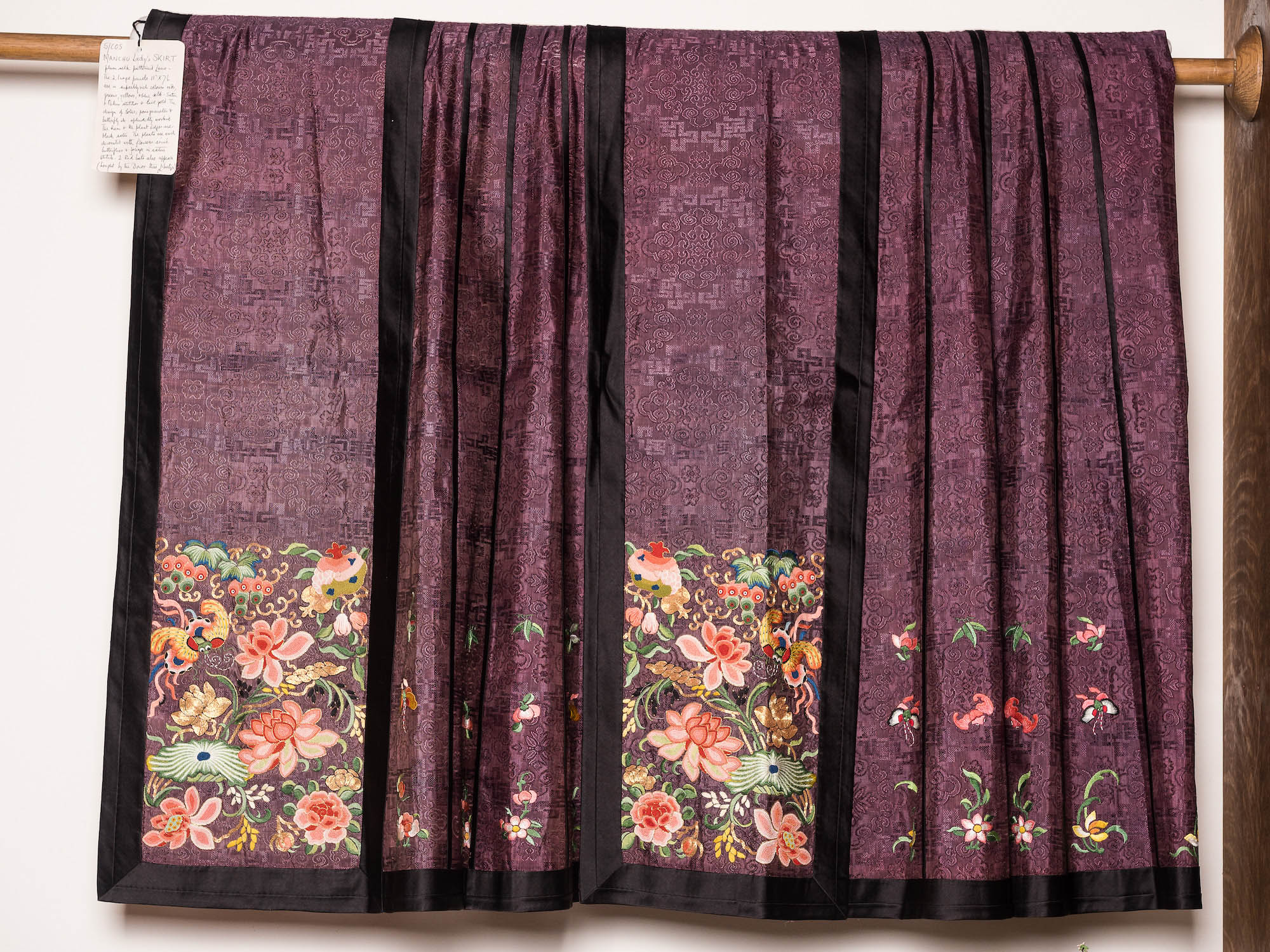 Chinese embroidered silk skirt for a Manchu woman. The intricate design, rendered in ‘Peking’ knot, also called forbidden stitch, includes motifs such as pomegranates, lotus flowers and bats. Rachel Kay-Shuttleworth bought this skirt at Liberty in London, likely between 1900-1920. Liberty had begun trading in 1875 and opened an Artistic and Historic Costume Studio in 1884. It was quickly established as a fashionable place to shop, associated with the Arts & Crafts movement and ideas around Aesthetic Dress and played a key role in popularising silks from Asia, including China, Japan and India, for a fashionable, artistic clientele. Late 19th century 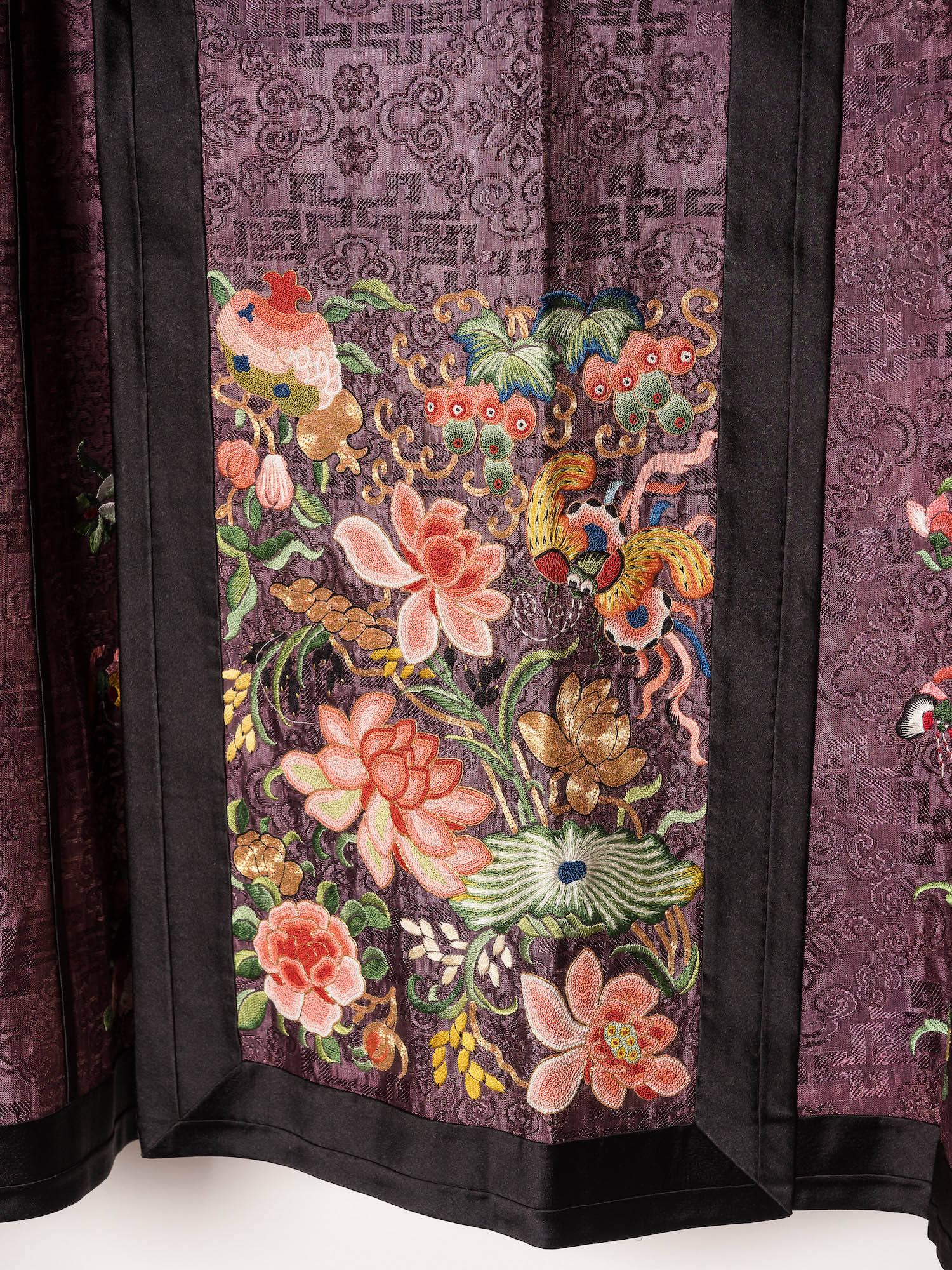 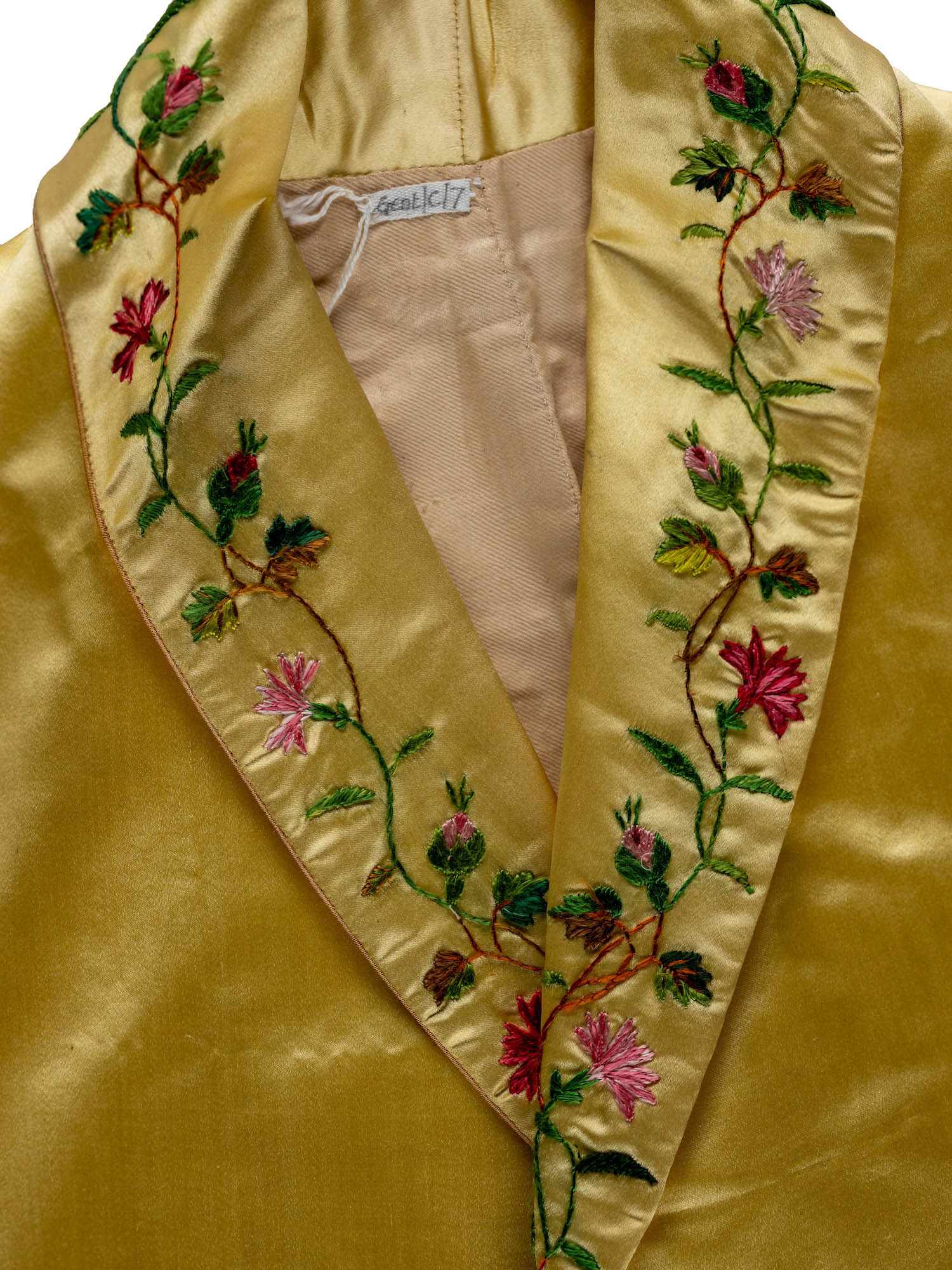 From the late 17th century the waistcoat was an important garment for men in England and by the 19th century it could be much more decorative than other items of men’s clothing. This yellow waistcoat features rosebuds and carnations embroidered in floss silk. 19th century 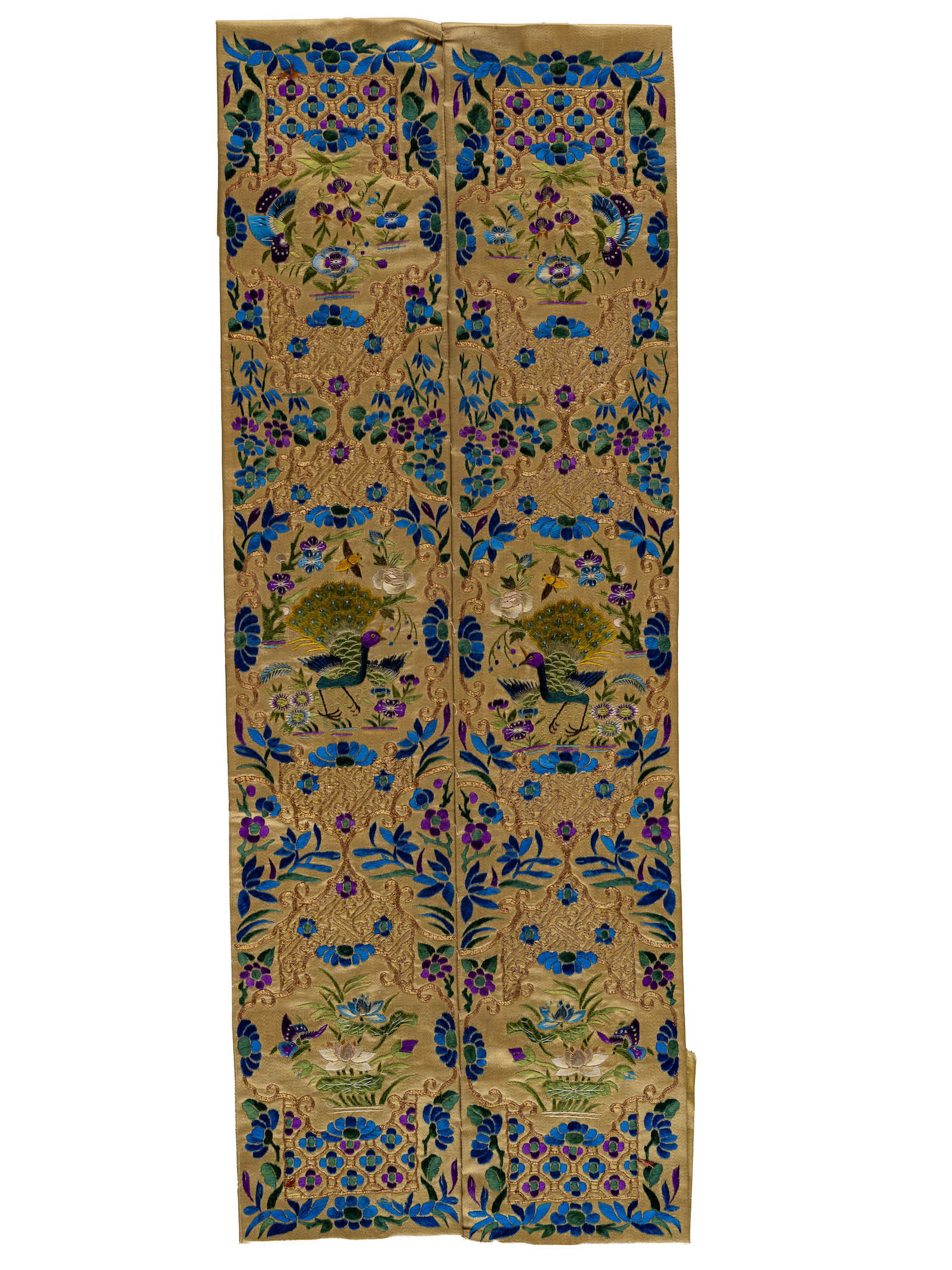 Embroidered sleeve bands formed an important decorative part of the robes worn throughout both the Ming and Qing dynasties. Butterflies were a popular motif and on these examples we see them alongside botanical motifs such as lotus flowers and peonies, as well as peacocks and bees. 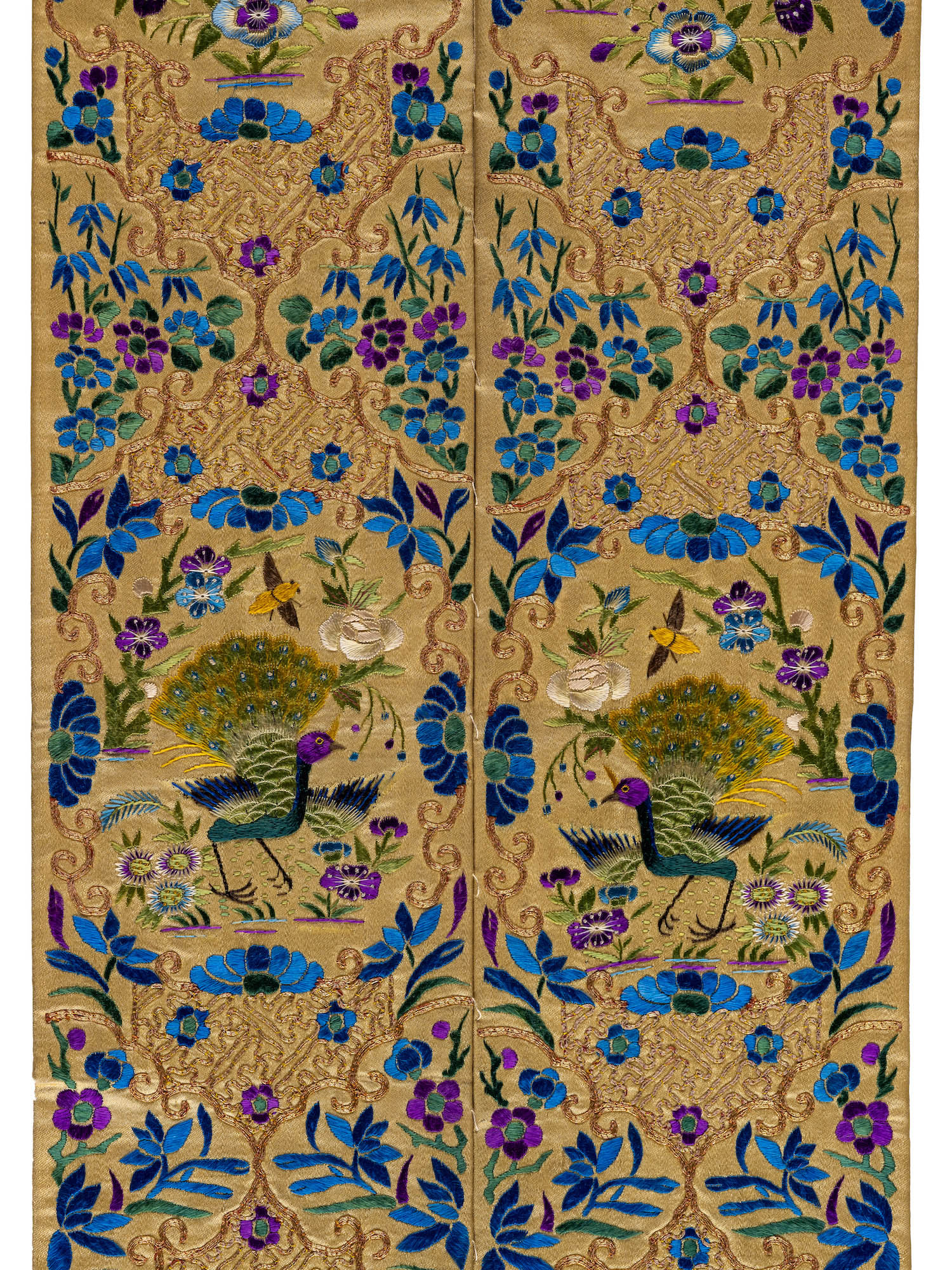 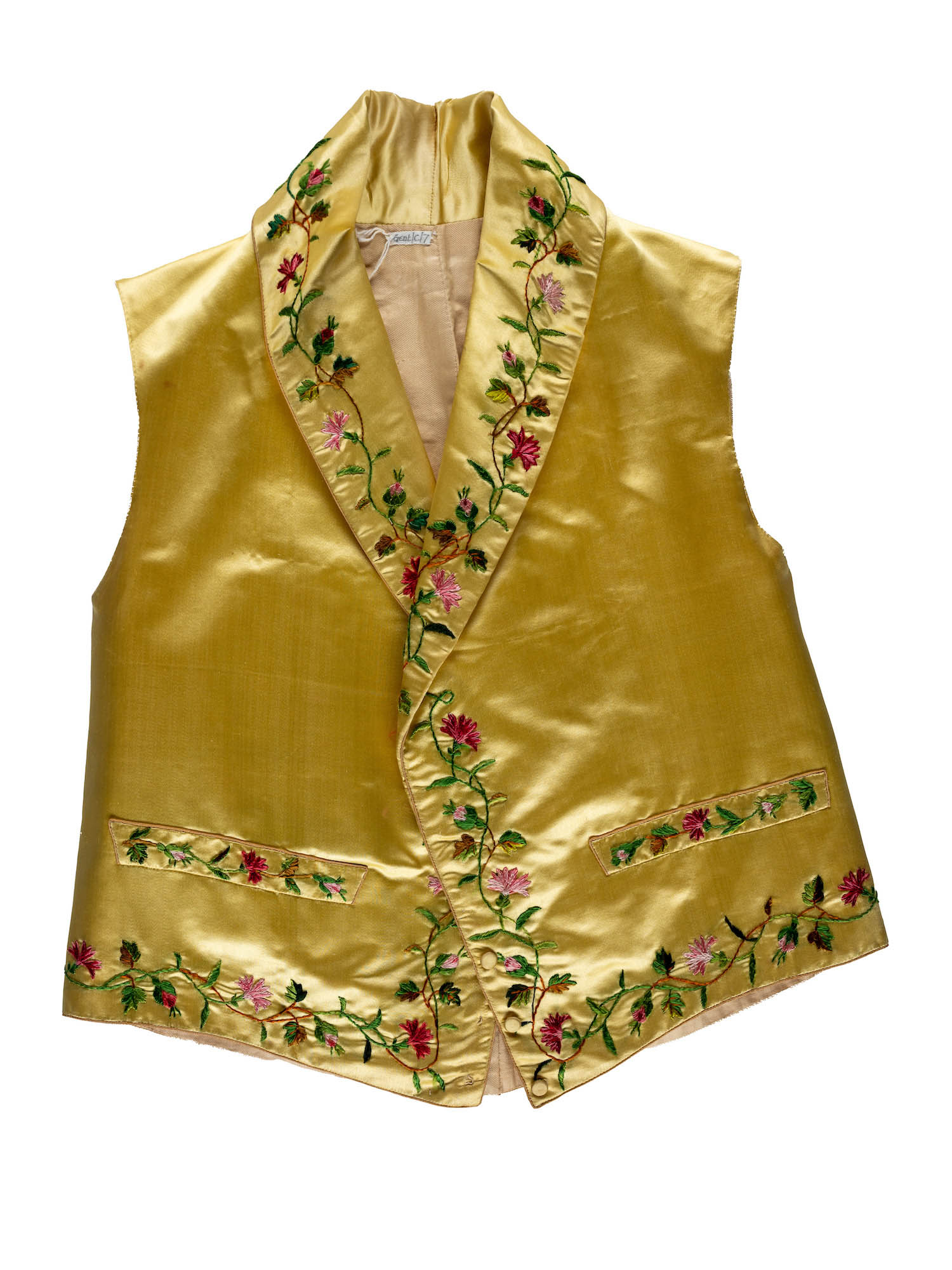 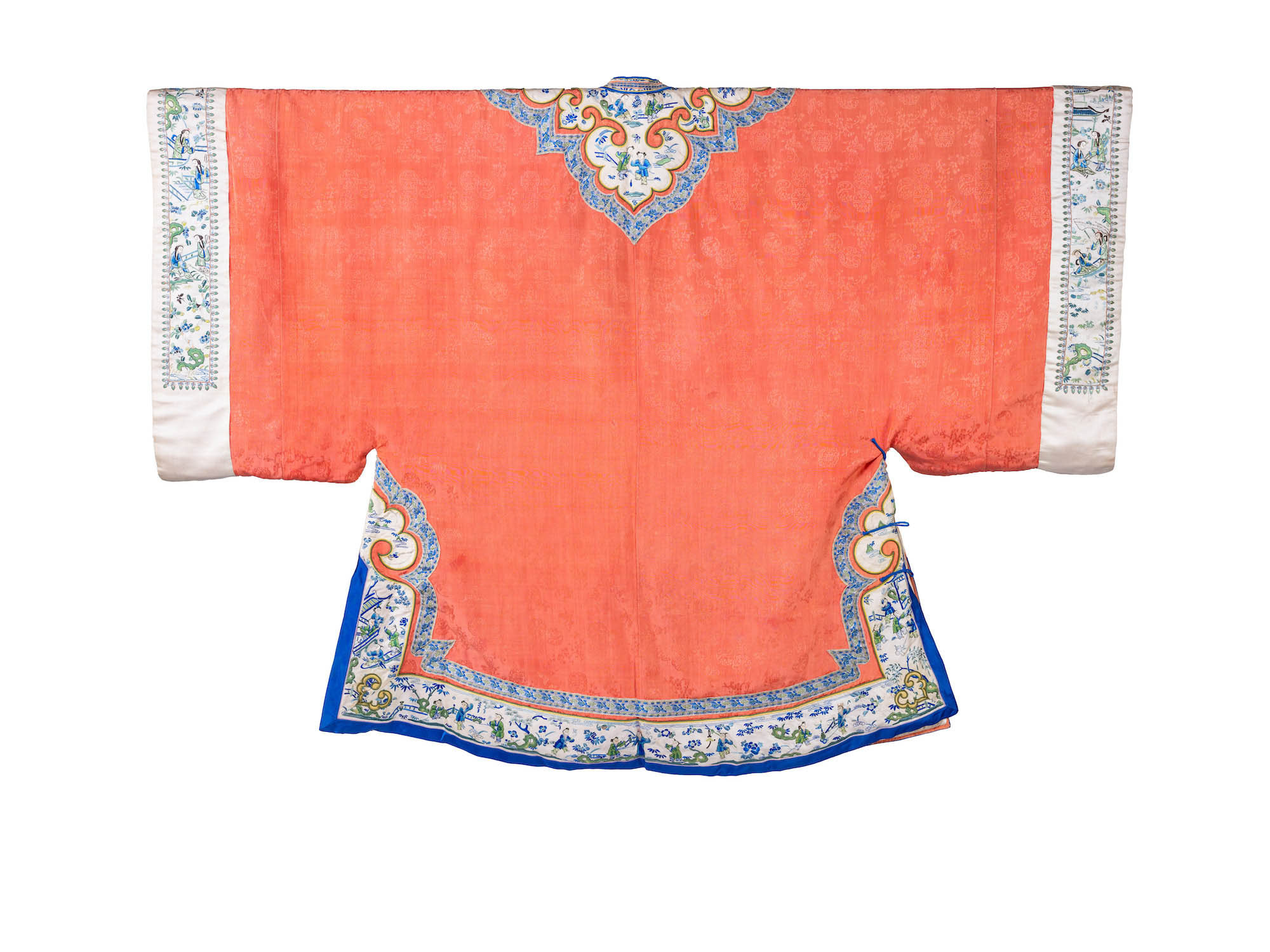 This Qing era robe with square sleeves cut in one with the body is a great example of the silhouette that became popular in European fashion at the end of the 19th century and into the 20th. Robes from China and Japan (and elsewhere) had previously influenced men’s informal clothing such as the banyan, a garment worn at home that many gentlemen chose to wear in portraits. At the turn of the 20th century, ‘undress’ styles became fashionable for women. c.1880-1900